For bookings, see bottom of page. 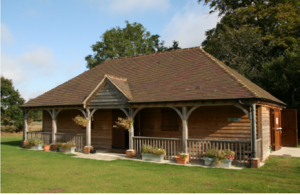 Egerton Playing Fields comprise part of a larger area, extending to about 11 acres in total, that was given to the parish by Lord Cormwallis in 1920 for use as a recreation ground.

Unfortunately as the land is on the scarp slope of the Greensand Ridge it was not suitable for playing organised sport and the village Cricket and Football Clubs had to play elsewhere by courtesy of local landowners and farmers.

Prior to and just after WWII, both clubs played on a field at Crockenhill known as Long Wozzell but in the early 1960s the Football Club had to move away as the part of the field that it used was required for agriculture. Over the next few years the Club played on two other local fields, firstly in Chapel Lane. Egerton Forstal (opposite what is now the Free Church) and then on land owned by the Club President, Mr.Leslie Palmer, on the parish boundary at Burnt House Farm in Bedlam Lane.

Then, at the end of the 1960s the Cricket Club was also made aware that it too would have to vacate Long Wozzell, where it had played for 50 years, and the suggestion was made that the Parish Council should investigate the possibility of levelling part of the Recreation Ground, to make it suitable for playing sport, where both clubs could have a permanent “home” in the centre of the village. In 1969 a steering group was formed under the Chairmanship of Mr.Sandy Waddington, a retired schoolmaster who had been a prominent sportsman in Egerton in his time, and in 1970 the group secured a formal constitution by completing a Trust Deed and taking the name of Egerton Playing Fields Committee. Geoff Wickens became the Secretary/Treasurer and Tim Oliver a third Trustee and the deed also incorporated a Lease from the Parish Council of the affected areas, thus providing the security that was necessary for the new Committee to obtain funding.

A scheme was produced for the village by the County Council, whereby extensive earth moving and levelling would have resulted in a sportsfield upon which both cricket and football could have been played on the same level but that scheme was too costly and was rejected. A more modest scheme, with the pitches on different levels, was then produced locally with the help of a survey and levels taken by Egerton resident Mr.Peter Johnson and by using local contractor Mr.Ernie Hopkins for the earth moving, this work was able to proceed in 1970 with the aid of a substantial grant from the (then) West Ashford Rural District Council and loans from both the National and County Playing Fields Associations.

Although these far reaching alterations to the village landscape were completed in 1970, there followed a period of seeding, settlement and consolidation before the first games could be played and it was not until 1972 that the Football Club was able to transfer to the new site, followed by the Cricket Club in 1974.

Unfortunately funding for the scheme was not sufficient to permit modern changing accommodation to be built to serve the newly created playing areas and so a second-hand prefabricated dwelling was acquired and erected in 1974 by voluntary labour for use as a pavilion in the short term. However, that building was to remain in use until 2011, way beyond its’ original life expectancy, before it could be replaced !

The Playing Fields Committee, supported by the whole village community, started to raise funds for a modern replacement pavilion after the new Village Hall was completed in 2000 and, with the aid of a number of grants and voluntary fund-raising efforts, the building was finally opened in July 2011. There had been a number of set-backs along the way, and the final design was the third that had been produced, but the village at last has a modern facility that is not only practical and meets all requirements of the governing bodies of the two sports but it also has an attractive appearance and fits in well with the surroundings of this prominent hillside site; it should serve the needs of the village for many years to come.

Whilst the main use of the Pavilion is aimed at sporting events such as cricket and football or the running club, it can be also hired for many other functions and events. For example: Small Family Parties; Committee Meetings (Up to 28 Persons); Art Groups; Musical Groups; Baby Showers; Rehearsals; Art / photo exhibitions; Jewellery Parties

The Pavilion is equipped with a fully functioning kitchen complete with oven, hob, refrigerator, tea urn, dishwasher, cups, plates, and cutlery for 24 people.

EGERTON COMPUTER CENTRE
Is Re-Opening from
SATURDAY 21ST MAY  2022
And thereafter every Saturday morning until further notice
10.00 – 12.00 am